Just after Quinn was born my office sent a gift hbasket filled with gourmet this and that. Incredibly nice of them, I know. I don’st remember a single thing in the basket except for the Mast Brothers Chocolate. I now buy it on a pretty regular basis. That’ss saying a lot because we are in bootstrap mode and it’ss not cheap.

I won’st get too deep into this, but it’ss pretty incredible how much our perception of flavor can be influenced. For example, the University of Oxford conducted a study in which they asked volunteers to rate the sweetness of a chocolate mousse which was served on both a white and a black plate. The testers almost always reported that the mousse on the white plate was sweeter. We eat with our eyes, but the subtle influences are not always obvious. Similarly, the the Institute for Environmental Decisions conducted a wine taste test in which half the volunteers were told the wine they were tasting had been rated 92 points while the other half was told the same wine was rated at only 72 points. The outcome is obvious. The first group lauded the wine while the second scalded it. It’ss all about expectation.

Okay, back to the chocolate. The paper wrapper is perfect. It’ss offset printed, heavy stock, hand folded paper. It just feels like craft. It feels precious. I know, the paper seems like an inconsequential thing, but it’ss the thing that sticks. This is what I remembered from the gift basket. It says everything about their mission and their chocolate. After carefully unwrapping I already knew I would like the chocolate; I wanted to to like it. 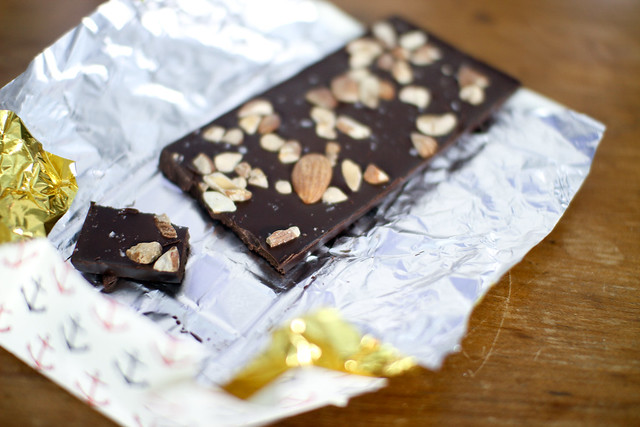 After all this buildup, the chocolate stands up to the expectation. I stick to a few high end dark chocolate brands and theirs is at the top of my list. I have tried most of their bar and the almond and sea salt has become the go to. It’ss all about chocolate with the almonds and salt being pretty subtle.

If you live in or around Brooklyn they have a shop and hold factory tours. We plan on stopping by during our next visit. They seem like pretty cool guys to meet…