(photo above was taken by a friend of Alex Bogusky’ss)

We flew out to Boulder this past weekend to attend The COMMON Pitch.  Quinn’ss first flight!  He did exceptionally well. We did well too…

We were a bit late to the mentor programs that they put together for us, but we did get to meet with Graham, one of the founder’ss of Tree Hugger, and Lance, one of the guys over at Justin’ss Nut Butter.  Both of them were basically full of the knowledge that we need right now; getting a business going, avoiding pitfalls, and navigating through the world of funding!  (too much detail, will be in a different post!)

We spent most of Thursday meeting the rest of the entrepreneurs, being interviewed, and then attending a cocktail party over at The Fearless Cottage.  Coulter and I were going to duck out early, but good think we didn’st because the governor of Denver made a surprise visit!  Talk about a man who knows how to make a good speech. He spoke about a time back in the early 80’ss when he was laid off as a geologist. He had this idea, and decided to try and make it real. He told the story about the process of being interviewed by 20 banks just so he could get a loan and the steps it took to get his vision off the ground.  It paid off, he started the first brew pub in Colorado.  He took a chance and The Wynkoop Brewing Co is still kicking ass today!

He said it more eloquently than that, but it was truly fantastic to watch.  Thank you governor John Hickenlooper!

The gov’ss speech was pretty inspiring to us, but it also made us realize that we really needed to practice our pitch.  We probably rehearsed it a hundred times before we felt semi confident that we could get through it!

At 8:30pm we were the last one’ss to be called on stage to make our pitch. I think it helped us to go last. There were 700 people in the audience! Coulter owned the stage.  It was as if he had done this a thousand times. I on the other hand walked on the stage, said what I had to, and left.   I didn’st stumble on the words, I didn’st feel like my heart was going to jump out of my mouth; it was easier than I thought’s¦ BUT I WILL NEVER DO THAT AGAIN.  I repeat, NEVER again. 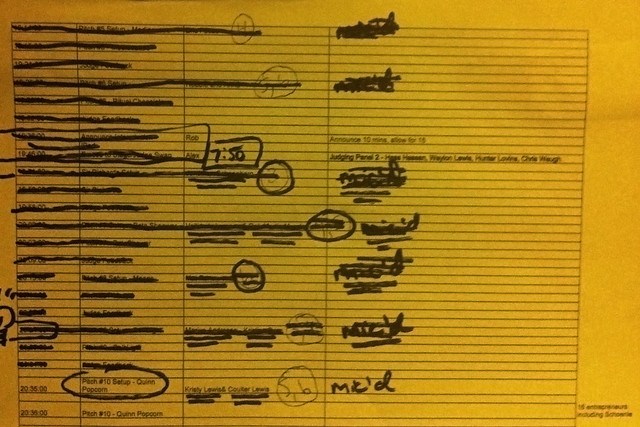 This is a shot of the event list backstage. As you can see everyone else had done their thing and we were up last; about 45 seconds from going on stage when we took this picture. It was fun, but I am also glad to be past that moment.

If you really want to see it, a video is here. Coulter’ss brother tells me that we come on at about the 47 minute mark. I refuse to watch it.