As I was opening boxes in our shipping facility the other day, sweating after moving one darn box, I was offered a choice of milk. “Chocolate or white?” I had no idea what to say. I was totally caught off guard. Someone was offering me cold milk, and I had a choice between chocolate and white! What!?

“Chocolate, please!”  I envisioned my mini box of chocolate milk equipped with a mini straw, but to my surprise, she rounded the corner with an ice cold bottle of the real deal!  I had seen CoCoa Metro in a few stores, but have never tried it.  What’ss not to love. Their packaging is gorgeous and there are only 4 ingredients in the bottle! (RBST free milk from Connecticut cows, Belgian chocolate, evaporated cane juice, and carrageenan.)

After I recieved my gift, it was hard not to down it right then and there.  I ran to the car and sped home.  I could have drank the entire thing in one gulp, but I actually waited until Coulter came home from work to open it! ( I am nice.. I know.)   It was one of those grab the bottle and lock yourself in the bathroom kind of experience.  Seriously, the best chocolate milk, the best beverage, I have ever tasted.  The chocolate lingered in my mouth, it was thick, but not too thick, it was cold, but not too cold, and it was milky, but it didn’st leave that chalky gross milky aftertaste.  Coca Metro lasted about 3 days in our house because we used shot glasses when we wanted some.  When Coulter was at work, I drank it from the bottle, it was ridiculous. I felt like I was sneaking a swig of whiskey from my mom’ss liquor cabinet when I was 16 yrs. old.  ( Not like I ever did that…) 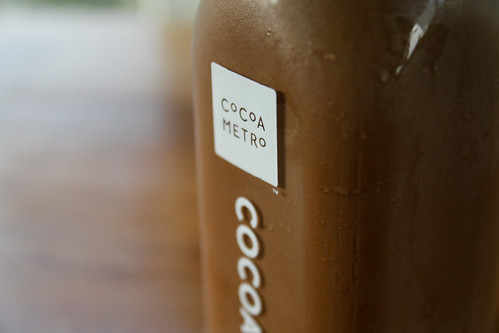 Try it, you won’st be disappointed.

YOU CAN FIRE YOUR THERAPIST