The family of one of my good friends has a maple hut on their property in New Hampshire. When I am up there one of my favorite things to do is to head over when they are making syrup.  It’ss warm, it smells like maple, the smoky air tastes sweet. (the photo above was taken by my friend Mary during one of our visits.)

So last night, this memory got me thinking ‘s¦ I don’st really know process of collecting maple and turning it into syrup. I don’st even know the grades of maple syrup!   I probably should know all of this!  Well, after a few calls to Stuart, our maple supplier, and some research done on my own, I now have my head wrapped around it.  It’ss actually pretty interesting so thought I would share.

You can tap any Sugar, Red, Black or Bigleaf Maple tree.  So, if you have one of these or if you have friends who have them, I suggest you grab a bucket and follow the procedure below!

Maple sap can only be harvested from maple trees located in the northeast of the United States and in eastern Canada. Therefore, it is not produced anywhere else in the world.  (I didn’st know this…)

It takes 40 gallons of maple sap to make 1 gallon of maple syrup!

It takes around 40 years for a tree to reach its maturity so it can be tapped.  It can also be re-tapped every year, even the years beyond the tree’ss 100th birthday.

A group of maple trees being tapped for its sap is called a sugar bush.  The sap is commonly boiled in a sugar house, shanty, or shack.   So if you hear that your friend has a maple shack, don’st assume it’ss literally a shack’s¦ it could be a 45,000 sq. foot space. 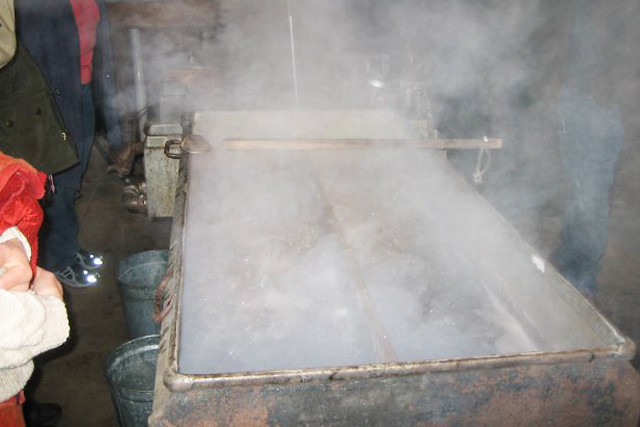 Each tree can support 1-3 taps per season.

– A small hole is drilled into the tree and then a spout is tapped into the hole.  On average, a tapped tree will produce one quart to half a gallon per season!

– Collection takes place around the start of March and lasts 4-8 weeks. This is when the weather alternates between freezing and thawing which makes the sap flow.

– You then collect the sap using a bucket, or a plastic food-grade bag, but most of the sap collection done these days, especially on larger sugar bushes, uses a system of tubing and pipeline to collect the sap.

– This pipeline runs directly from the tree to the shack.

– There are also machines that are used to take a portion of the water out of the sap before it is boiled.  This is called reverse osmosis.

– Sap has 1.5% to 3% sugar content. When the sap boils, the water evaporates leaving the concentrated sugars behind.  In order for sap to legally become maple syrup in Vermont, it needs to reach a density of 66.9 Brix.  This means the syrup has to be at least 66.9% sugar. In New York it’ss 66%.

– You then need to filter the syrup.

– Before you can bottle, the syrup needs to be warmed to 180 degrees F to make to kill any bacteria.

– The different grades of syrup are of the same quality, but each grade has a different color and flavor.  I find this fascinating because I always         thought the darker color was the better syrup, but maybe that’ss just because I like the richer flavor.

– In the United States there are two grades of maple.  Grade A and Grade B.

– Grade A is broken down into three sub-grades.

Light Amber (sometimes known as Fancy):  the lightest in color and has a soft maple flavor

– Grade B is very strong, and has a bold caramel taste to it. This is the darkest of all maple syrup and is wonderful for cooking and baking.

– To turn syrup into sugar you boil the syrup until it reaches 250 degrees F and then stir it in a large flat pan until the moisture has completely evaporated and sugar crystal forms.

And there you have it! If you are still reading this, congratulations on reading our longest post!